Dr. Kenneth’s book, The Era of the Entrepreneur, released in 2015 is the business book for start-ups and veteran entrepreneurs alike.  His leadership and teachings are pillars in his communities. Even with enjoying just about every money making success a man could want, his real passion is for giving back. One of his greatest awards and recognitions is for feeding hundreds of thousands of people for free over the last couple of decades.  The philanthropic gesture happens by feeding people at his Dusties free on their birthday and by being the sponsor and supporter of many of the largest non-profit organization in the nation.

His experiences are great examples to everyone and his connections are priceless. Dr Kenneth is a coaches coach, a trainers trainer and a leaders leader.

KENNY ON HIS LATEST BOOK TOUR!

2016 – Book  Release THE ERA OF THE ENTREPRENEUR by Dr. Kenneth Lewis, Sr.

Dr. Kenneth Lewis Sr. is the Action Entrepreneur and the Movement Maker. His business and life have attracted the attention of everyone from Oprah to the Obama’s.

Kenny has decades of sales awards, has taken multiple companies from zero to hero making millions and still owns the iconic Kenny’s Ribs and Chicken and Dusties Southern Style Buffet that has been publicly celebrated at Steve Harvey’s Neighborhood Awards and frequented by many celebrities. 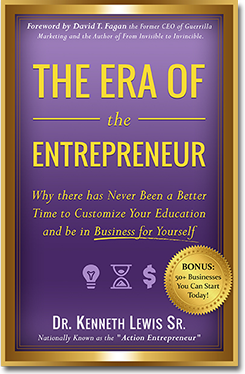